The Bosch Evolution Ascenta SHE3AR55UC suffers from second-rate performance and lackluster design, but its high capacity and efficiency standards will satisfy many owners.

The offers an attractive price tag for unattractive design and average performance. The MSRP is $649.99, but we found it online for $550. While it is highly efficient and performs well enough for most uses, its lack of customization and scarcity of extra features make for a less versatile machine.

As far as design goes, the is somewhat frustrating. If you’re okay with a smudge-laden black interface over stainless steel, then this design won't bother you a bit. If you're a stickler for simple, clean design—like we are—the Ascenta might not be for you.

The has a stainless steel exterior with a highly reflective control panel. It actually gives off enough iridescent light for you to watch yourself choose a wash cycle. Also, the buttons are dispersed in a random hodgepodge of text that may be bothersome to design fanatics.

The SHE3AR55UC’s smooth stainless steel finish may be enough to excuse the text- and fingerprint-laden console, and the sleek metallic interior allows for a smoother dry cycle.

The controls are all located on the front panel. Among the more frustrating—or at least counter-intuitive—control flaws, the wash selector scrolls only to the left and right and does not cycle back, which would allow for more instinctual operation. Furthermore, turning the machine on and off involves a confusing three- or four-second operational delay. Once again, though, the poorly designed and cluttered interface may be of secondary importance to most users. Many people set their dishwashing cycle once, then use the same settings every time.

The reflective, stainless steel tub shines to give the interior a spacious appearance.

The top rack includes one row of collapsible tines. It also includes a moveable silverware holder for cutlery-heavy loads. Like similar Bosch models, the top rack is easily removable.

The bottom rack has a series of disparately spaced and angled tines. This allows for considerable maneuverability when loading large or oddly shaped dishware. However, the lack of a collapsible row of tines can limit space.

The single-piece cutlery basket is rather large and versatile. It latches onto the right side of the lower rack and includes six internal containers with hinged silverware holders.

The consumed, on average, 0.54 kWh for the Normal Wash and 0.95 for the Heavy Wash. Surprisingly, the Half Load consumed more electricity than the Normal Load, requiring about 0.64 kWh. That makes for a electricity cost of about $0.05 to $0.09 per wash and is on par with most washers of its size and price.

Water consumption was pretty low, with only 2.49 gallons of hot water used on a Normal Wash and 7.51 on a Heavy Wash. That will add to your water bill between $0.11 and $0.20 per cycle, respectively. However, given the clear superiority of the Heavy Wash, your averages may weigh toward the more expensive end of the spectrum.

Our numbers are calculated based on national averages for energy and water consumption. The will only cost an average $25.60 per year to operate, slightly more than Bosch's estimate of $23/year but still well below the average of most competing dishwashers. Depending on how much you're willing to spend per cycle, it may be worth it run the Heavy Wash more often than the Normal.

The boasts a relatively quick wash cycle. However, the mere 92 minutes it took to complete a Normal Wash was reflected in its meager performance. Accordingly, the extra half-hour needed to complete a Heavy Wash may be worth it for the more thorough clean. The Half Load, which uses more water and electricity than the Normal Wash, completed in 76 minutes. 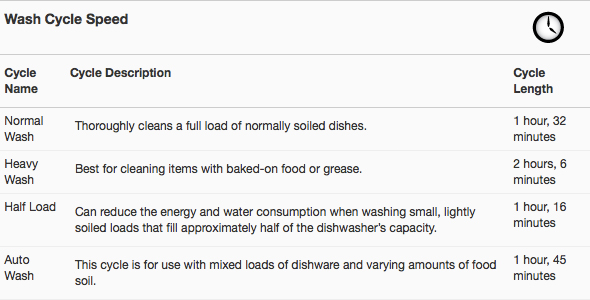 Overall, the performed well for its price range. We did find tiny spinach particles scattered about the load, even on the Heavy Wash, but with some manual scrubbing this shouldn't be a problem. Shoppers should consider how much they're willing to rinse off dishes before loading them into the washer, as well as how long they want to wait for a cycle to finish.

While there is no quick wash cycle, the Half Load option completes in a mere 76 minutes, although it uses more water and energy than the Normal Wash.

The performed rather poorly in the Normal Wash. It had particular trouble in our spinach and lipstick tests, and the oat flakes left a noticeable imprint on white plastic. This underscores the importance of scrubbing dishes before loading them for a Normal Wash—something to consider if you're not interested in manual dishwashing.

Glass and silverware were cleaned fairly well, but we noticed that spinach flakes seemed to collect throughout the interior of the machine. This was pretty frustrating considering their presence tarnished otherwise clean dishes.


While the Heavy Wash performed better than the Normal Wash, it compares rather dismally to market standards. Spinach residue was still found throughout the load (although in smaller quantities than the Normal Wash), and our melted cheese test was almost completely uncleaned. Other plates, bowls and silverware were basically pristine. If users are feeling particularly lazy and not willing to scrub their dishes, the Heavy Wash is the best option, but may still leave behind uncleaned dishes.


The includes a Heavy Wash, Normal Wash, Auto Wash and Half Load. While there is no "quick clean" cycle, the Normal Wash or Half Load should meet most washing needs.

There are two additional wash features: Delay Start allows users to postpone the start of their wash by three, six or nine hours (not much considering some washers offer up to 24 hours), and the Sanitize option adds a high-temperature disinfectant rinse for especially dirty loads. There is also a child lock for discerning parents.

We found the could hold up to 11 place settings, including serving dishes. While this capacity may be plenty for most users, it is well short of the 14 place settings claimed by Bosch. In all, however, the dishware fit comfortably in place.

The has two curved wash arms. Each is located below its respective rack, with the top arm attached to the rack itself. They are lightweight but somewhat flimsy and cheap-feeling.

The filtration system includes three filters for different sized objects: a Large Object Trap, a Fine Filter and a Micro Filter. Although the system is self-cleaning during normal use, each of the devices can be easily removed for manual cleaning and will likely need to be from time to time, especially before washes with large food particles.

The bottom rack has a series of disparately spaced and angled tines. This allows for considerable maneuverability when loading large or oddly shaped dishware. However, the lack of a collapsible row of tines can limit versatility.

The top rack includes one row of collapsible tines. It also includes a moveable silverware holder for cutlery-heavy loads. Like similar Bosch models, the top rack is easily removable. This is convenient for loading dishware in a separate room, or for cleaning the interior of the machine.

The single-piece cutlery basket is rather large and versatile. It latches onto the right side of the lower rack and includes six internal containers with hinged silverware holders.

The cutlery holders on the top rack is collapsible and doubles as a holder for small tea cups or other small dishware.

The plastic detergent dispenser is located at the top-center of the washer door, with the adjacent rinse aid container to the right. Anyone familiar with Bosch dishwashers will appreciate the standard setup. The dispenser lid slides laterally and is easy to open and close.

We found dishware to fit snugly in place with a variety of loading capabilities, but we also agreed that additional adjustability, particularly on the bottom rack, would be nice. The handling of the machine is fairly straightforward, and there are plenty of lights to indicate its operational status, but, once again, we found the interface to be distasteful and even downright silly. Why install two buttons to scroll between just four wash cycles?

The is pretty quiet, and lovers of ambient music may even be soothed by its wave-like tone.

The front panel holds all of the Ascenta's controls, many of which are a bit frustrating—or at least counter-intuitive. For one, the wash selector scrolls only to the left and right, forcing you to make use of both left and right selector buttons. Furthermore, turning the machine on and off involves a confusing three- or four-second operational delay. That means that you might push the button, see nothing happen, and think that you somehow missed or didn't push hard enough or bought a defective model. For users that typically use the same cycle over and over again, these quirks are easy to get used to, but expect a bit of a learning curve.

The child lock is convenient enough; you won't have to worry about a toddler racking up your water bill. There are also lights indicating whether the machine is active or clean.

Here the shines. With minimal water and electricity use, it will cost an average $25.60 per year to operate, far lower than market equivalents.

Here the falls short, but not too short. It's important to note that this machine does its job, but given its price tag and lackluster design we were hoping for something better.

Extra features were also rather minimal. Customization is virtually naught, as is a light wash option, but there is a Sanitize feature, and if you're looking for simplicity then it may be a good option after all.