With decent but inconsistent performance, the Haier DWL2825SDSS is a good option for homeowners looking to save some money on a plain-old dishwasher.

For an MSRP of just $499, the offers a decent clean with plenty of wash options to satisfy most cleaning needs. While it’s not the prettiest or most reliable dishwasher we’ve come across—or the most efficient—much of what makes this machine work comes down to price.

The shiny black control panel is housed in the front of the dishwasher door. While its placement is as tasteful as it needs to be, the look may be a bit of an eye sore for some consumers.

The front door is sheathed in a rugged stainless steel that is not exactly impervious to fingerprints. But for a $500 machine the mere presence of stainless steel seems a bonus.

The control panel is highly reflective and curves along the brim of the dishwasher door. The button labels and status displays are evenly spaced, giving the interface an air of simplicity. We may be losing our minds, but we couldn’t help but notice that the handle looks vaguely like a smile, and the two button sections like eyes. That’s right, we’re saying the looks like a big, mechanized smiley face. Feel free to disagree.

The wash tub is also covered in stainless steel. This is another example of the ’s value, as stainless is costlier to manufacture and helps expedite the drying process.

The top rack is coated in a vinyl plastic and includes four rows of tines, none of which are adjustable. This wasn’t much of a problem, though, since the machine received a high capacity score.

The bottom rack includes 10 rows of tines (10!), two of which can be collapsed to make more room for bulkier dishes. They were all evenly spaced and sensibly positioned, which certainly contributed to the machine’s high load capacity.

The rather large cutlery basket is made of plastic and includes five interior bays, each with a lid that includes rows of utensil holders. While the lids themselves were somewhat flimsy and liable to come loose, we were able to fit more than enough silverware and utensils.

The is fairly efficient in its power consumption. While the Pots & Pans cycle used a substantial 1.01 kWh per wash (for a cost of roughly 10 cents), the Speed Cycle and Normal wash used 0.40 and 0.69 kWh, respectively. These figures make for an electricity cost of 4 and 8 cents per cycle. However, we imagine that much of this efficiency is the result of the ’s relatively low wash temperatures, which only reached 139 degrees Fahrenheit in the Normal wash.

The ’s inefficiency, although mild, stems mainly from its heavy water consumption. While the Speed Cycle, not surprisingly, used up a mere 2.97 gallons of hot water, the Normal and Pots & Pans cycles consumed 7.22 and 8.67 gallons, respectively. This made for a hot water cost of 7 or 8 cents per wash.

We calculated that—between the Speed, Normal and Pots & Pans cycles—the will cost about 8, 17, and 23 cents per wash. Based on the assumption that the Normal wash will be used 50 percent of the time, we expect the machine will cost you about $34 a year to operate. This is not really an above-average figure, but it’s still far from the realm of what you would consider “efficient.”

The longest cycle was the Pots & Pans wash, which we clocked at a hefty 134 minutes. The rest of the cycles were considerably shorter: 34 minutes on the Speed Cycle, 54 on the Light, and 98 on Normal. 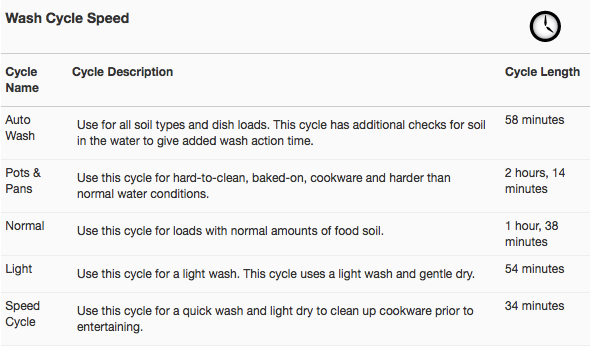 While some cycles—whether Speed, Normal, or Pots & Pans—came out shining and nearly perfect, others were downright filthy. This may have something to do with the filter, meaning you’ll need to clean it out fairly often, or it could be an oversight in its construction. Whatever it is, it’s worth noting if you’re considering a buy.

Of the three washes we tested, the Speed Cycle was probably the most consistent, but it was still the weakest performer. Quick cycles usually are, but they usually fall short in a few specific stain tests (milk, spinach, egg), but the Speed Cycle was notably inferior in our meat test (in which we bake a meat substitute onto dinner plates). There was also a drastic difference in the spinach test across multiple runs. At 34 minutes, the Speed Cycle lives up to its name, but we’d only recommend using it for very light wash loads.

The Normal wash was probably the most inconsistent across multiple runs. In our first test it nearly aced our dried milk stain (in which we cook milk to the bottom of drinking glasses), but on the second it was virtually ineffective. There was a similar disparity in our spinach, meat, and lipstick tests.

Given the performance of the other cycles, the Pots & Pans wash did surprisingly well on our baked lasagna test, but it was still somewhat inconsistent. Contrastingly, it was virtually useless on the burnt cheese stain. More impressive was this cycle’s performance on our lipstick test, which is always the most difficult stain for machines to remove.


The includes four main washes, plus a Rinse & Hold cycle intended for rinsing dishes for washing at a later time.

The customization options are indistinguishable from the wash options, as they are all add-ons to individual cycles. They’re pretty run-of-the-mill: high-temperature wash, sanitize rinse, and heated dry. The only thing missing is a delay option, but for $500 it’s hard to complain.

Aside from the rinse cycle and status display, there aren’t any additional wash options, unless you count the above customization features as options.

One of its stand-out traits, the has a pretty high load capacity. We were able to fit 11 place settings, including a serving setting. This is well above average and is likely a testament to the pragmatic, flexible design of the bottom rack.

The lower wash arm is made of a sturdy metal material—impressive considering the machine’s low price. The top wash arm is plastic, situated directly beneath the upper rack. There is also a third arm above the top rack.

The filter may be the culprit in this whole inconsistent wash complaint. While the drain button is convenient (and probably should be used frequently), the filter itself cannot be removed, making it extremely difficult to remove large food stains that fail to melt during the wash cycle. This causes build-up that manifests as stains in wash cycles over time. For that reason, frequent cleaning of the filter is recommended for a solid, consistent wash.

The bottom rack is highly flexible. From the 10 rows of tines to the two adjustable rows, there are plenty of ways to fit dishes both large and small. The layout of the bottom rack contributed heavily to its high capacity.

While the upper rack was less impressive when it comes to flexibility and capacity, we certainly didn’t have any problems. It's a standard layout, and we don’t imagine you’ll have any problems either.

The cutlery holder felt a little cheap but it served its purpose, which is to hold silverware and utensils. It can also be easily removed in order to fit large, bulky dishes.

Nothing special here. A single level indicates how much detergent to use, and the rinse aid dispenser features a removable lid.

You don’t need to be a member of Mensa to figure this machine out. Most of its shortcomings have to do with performance and efficiency—not design, construction, or usability.

It’s loud—not deafeningly loud, but it’s noisier than your average dishwasher. If you have a pet peeve about noise emanating from your kitchen then it may be worth reflecting on the hubbub of this machine.

Each option on the interface is selected directly via push buttons; there are lights above each to indicate selections. Everything about the control panel is simple enough and easy to figure out.

At a yearly operating cost of $34, the is middle-of-the-road. While its power consumption is relatively low, it uses a considerable amount of hot water on the Normal and Pots & Pans cycles—7.22 and 8.67 gallons, respectively.

If we could get the to perform more consistently we would be very impressed with its cleaning power. It helps if you frequently clean out the filter, but even that is difficult, given the inability to remove the entire unit. And you shouldn’t be asked to do that very often, anyway. Still, the cleaning performance is not bad; even the dirtier cycles we tested were not outrageously dirty. Inconsistency is just frustrating, and worth you consideration.

The features as many extras as it needs to. There are four main washes—Speed, Light, Normal, and Pots & Pans—plus a rinse cycle. Each extra feature—high-temperature wash, sanitize rinse, and heated dry—is used as an add-on to a chosen cycle. The lack of a delay option was disappointing. But one again, for less than $500? You can’t complain.

How long should your appliances last?

LG's smart appliances is more than just a gimmick

Sign up for our newsletter to get real advice from real experts.

Get smarter about what you're buying. Reviews, deals, and helpful advice delivered to your inbox.